By Assaf Wool from My TCEC Experience

Leela wins the season 17 superfinal. The final result is 17-12 with 71 draws. There were 7 decisive games in the last 10, Stockfish could still catch up but it lost three game pairs, one of those an unusual double loss. The consolation prize was a game pair win just before the end.

Leela wins for the second time. It missed the superfinal last season, this time it won the premier league and made sure it would qualify. Stockfish had an early lead in the match. Leela equalized and the score was very close in the first 34 games. Leela then won two straight game pairs, took the lead and kept it until the end. The lead extended from +2 to +5 only in the last 10 games.

This season’s superfinal was unusual in many ways, (check out my statistics report to see some numbers). The draw rate was 71% which is rather low for a superfinal. This was partly due to the fact that there were many (7) game pairs with two white wins. Perhaps the openings were a bit too biased for this season’s finalists? There were 7 games which ended with mate on the board (all Stockfish wins), inconceivable for a superfinal. The games were unusually long even for a superfinal with a NN engine (median of 96 moves per game).

Season 17 started with a change in the CPU hardware. The engines could use 176 threads, and not all engines had this ability. Moreover, the new machine runs on Linux, and Windows based engines had to adapt or run through an emulator. As a result some engines that played in many TCEC seasons dropped out (Fritz, Jonny, Chiron and others). Other engines used less threads and this made them weaker compared to the competition (e.g. Houdini). The GPU hardware was not ready in the first stages of the season and this caused format changes. The qualification league and league 2 were CPU only. League 1 was supposed to be in two parts, one CPU and one GPU, but there were only two GPU contestants and GPU-league 1 was canceled. In the premier league the CPU-only games were played first in order to reduce the time the GPU machine had to be available. All the games were played, but this unusual order lowered the suspense. The GPU engines arrived late and had to catch up the whole division.

Unrelated to chess, the whole season was played with the corona virus in the background. This affected people from all over the world, and was a topic for disscussion in the TCEC chat from time to time. We should be thankful that the TCEC organizers managed to keep the season going under these circumstances.

Previous games of the Superfinal

Games 91-92 started with the Traxler counter attack in the Italian game, white a pawn up and the black king without the possibility of castling. Evals started over 1 in game 91, Leela’s queen came forward and captured the g2 pawn. This opened a file for the white rook, the black king walked to the queen side and Stockfish castled long. Leela pushed a passer to a6 and Stockfish hid its king behind it. Stockfish’s eval was over 2 for a while, but nothing seemed to be happening on the board. The engines shuffled and exchanged pieces, and evals came down. On move 53 only QR vs QR remained, Stockfish ended the game in a perpetual check.

In game 92 Stockfish sacrificed a knight and attacked the king side. Leela exchanged queens and gave some material back to get a BN vs R imbalance. The evals increased over 2 as the engines cotinued to exchange pieces, on move 27 only RN vs R remained, Stockfish 2 pawns up. 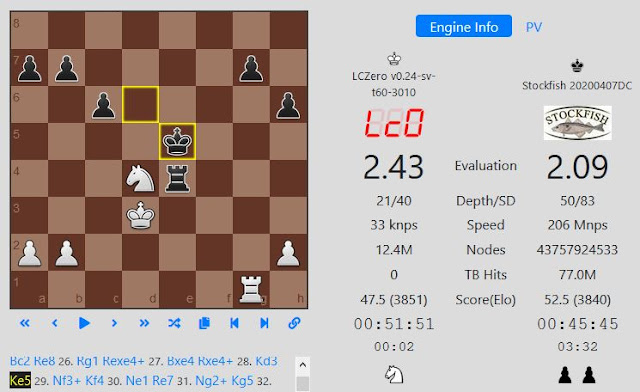 Stockfish tried to find a defendable pawn formation, its king stayed on the king side to guard the pawns there and Leela focused on the queen side. The black rook couldn’t defend all the pawns on its own, eventually Leela managed to capture one. 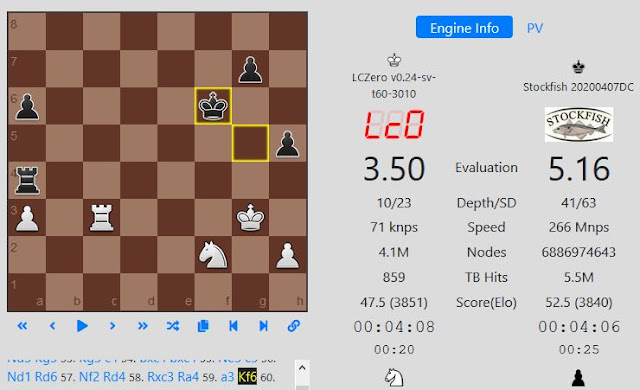 Leela had only two pawns left, it needed to keep them safe. The next target was the black a pawn, the black rook was outnumbered and the pawn was captured soon enough. Leela was very slow in pushing its passer forward, instead after 40 moves it captured another black pawn. After that Leela’s eval went high enough to adjudicate the game on move 130. Leela wins the game pair and extends the lead to +3.

Games 93-94 started with white castling short and black castling long. Stockfish’s eval climbed over 2 soon after the start of game 93. It pushed pawns on the queen side and ignored Leela’s queen on h3. Leela gave a pawn and opened the center king side. Stockfish exposed the black king and its eval was over 4, Leela was still confident its counter attack was enough to hold. 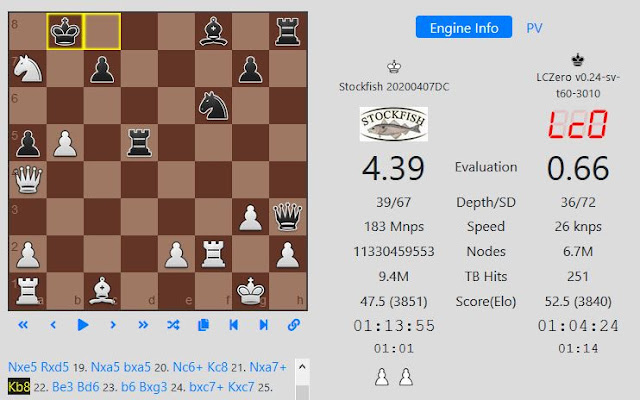 Leela tried to sacrifice a bishop and expose the white king, Stockfish ignored it and all its pieces chased the black king. Stockfish started to report mate scores as it won material, the game ended on move 43 with the next ply being mate.

In game 94 Stockfish opened a file on the king side, Leela pushed pawns on the queen side facing the black king. Leela targeted the c7 pawn while Stockfish doubled rooks on the h file, nothing happened in both cases. Evals increased and were over 2, Stockfish gave a rook for a bishop (was that necessary?) and the engines exchanged a pair of rooks. 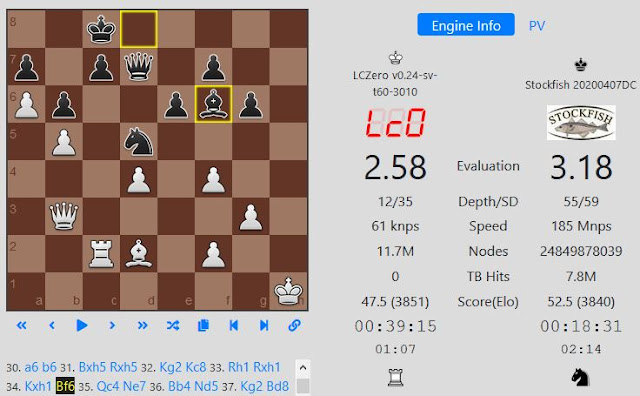 The engines shuffled for a while and then reduced to a R vs N ending on move 48. Stockfish captured a pawn on the queen side and tried to build a fortress. The knight guarded the a7 and c3 pawns, the king was responsible for the f7 pawn. Stockfish’s eval was very high, it didn’t believe in itself. However, Leela’s eval slowly came down as it thought about what to do. The white king had to watch the c3 pawn, the rook kept the black pieces busy. On move 95 Leela gave a pawn on the king side, and then continued shuffling. The real weakness in Stockfish’s fortress was the unguarded knight. Leela finally figured this out and brought its rook to drive it away. On move 144 Leela captured the c3 pawn. 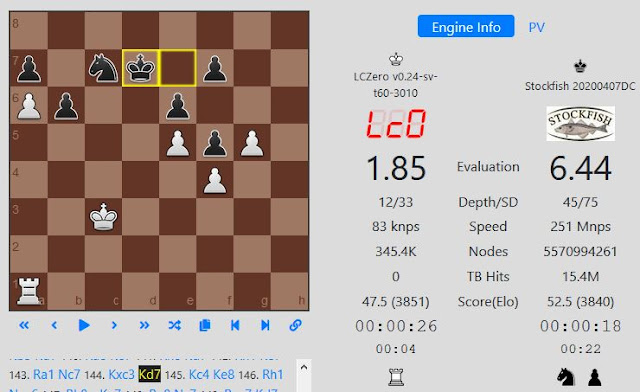 Stockfish captured the white a pawn but its fortress crumbled. The engines continued to trade pawns and the game ended in a tablebase win on move 173. Two white wins, very different playing styles. There is no change in the lead.

Evals were below 1 after the start of game 95. There were a few exchanges in the center that weakened the black king side, and Leela castled long. Leela pushed pawns on the queen side, gave a pawn and created a passer there. Evals slowly came down, then turned negative after a pawn trade gave Leela a second connected passer on the queen side. 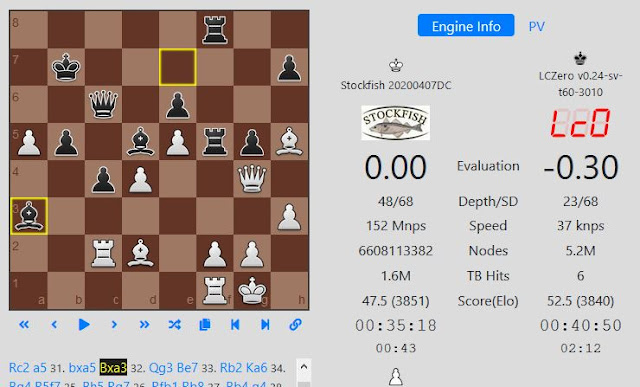 The black king found safety behind the white a pawn and (negative) evals quicly increased. Stockfish placed its rooks on the queen side to block the passers,  Leela slowly pushed them forward. Stockfish had enough, in a long series of exchanges it gave a bishop to remove the passers. The game reached a R vs RB position on move 59. 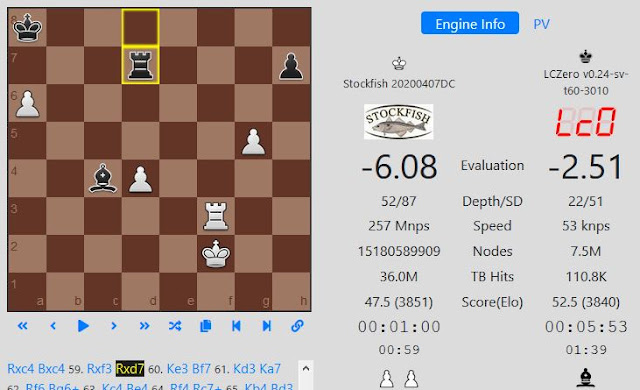 Leela kept its single pawn safe, and started to capture white pawns. It captured the a pawn first, then walked with the king to the king side and captured the g pawn. The game was adjudicated when the black passer started to move forward. Leela wins in black against the opening bias.

Leela gave a pawn early in game 96, opening a file on the queen side. Stockfish’s king side pieces did not develop and the black king was stuck in the middle. Evals slowly increased, Leela had a space advantage and all pieces were on the board. After several piece exchanges the queen side cleared a little, Stockfish’s rook was still stuck on move 34 and the black bishops had almost no moves available. 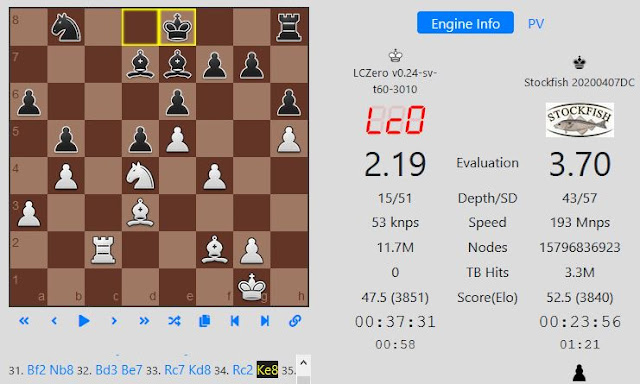 The black rook got out of its cage on move 44, Stockfish gave the pawn back and tried to open the position. Stockfish gave another pawn, the engines cleared the queen side pawns except for a white passer. After exchanging rooks the game reached a BN vs BN position and Leela captured another pawn to go 2 pawns up. 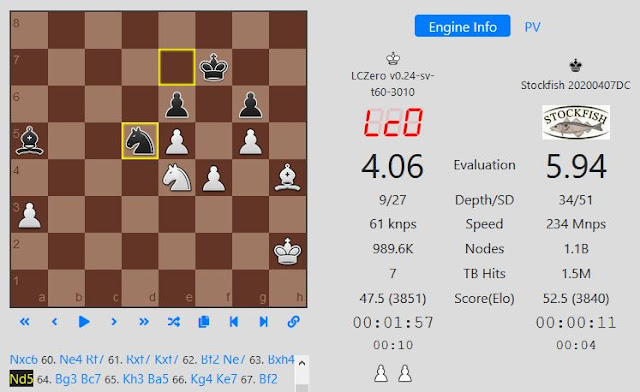 The material advantage was enough to win. Leela’s king walked to the queen side, and the a pawn slowly moved forward. The black pieces had too many targets to defend and they could hardly move. Leela trapped the black bishop and then Stockfish watched as the white king marched back to the king side to capture the bishop. The game was adjudicated a few moves later. Leela wins this game pair from both sides, its lead grows to +5.

Games 97-98 started with a 24-ply book, a popular line in the King’s Indian defense, Orthodox variation. In game 97 the engines formed a long diagonal pawn line, then exchanged pawns at both ends of the line and opened the position. Evals came down to 0, starting from move 24 the engines exchanged pieces until only RN vs RB remained on move 35. The game was adjudicated quickly.

In game 98 the engines stayed on popular and drawish lines until move 18. Leela gave a pawn early but other than that there were no exchanges. The center and king side were blocked by a long pawn wall, Leela had more space on the queen side. All the pieces were on the board, Stockfish had a weak backward pawn on c7 and it was hard to move. On move 40 the first minor pieces were exchanged, Leela placed all its major pieces on the b file and evals increased over 1. On move 54 Leela gave a second pawn and opened the b file. 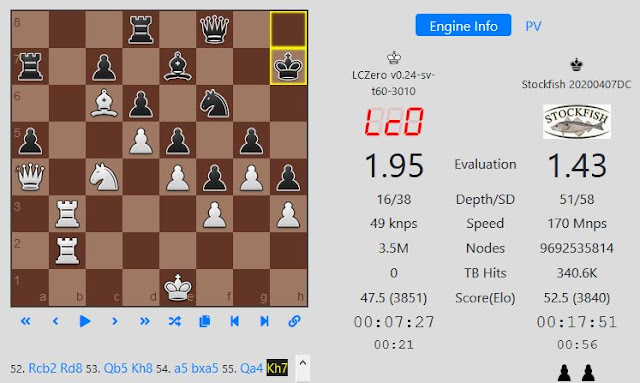 Leela had an entry point, the engines shuffled while Leela considered what to do next. It placed a rook on b7 and arranged its pieces for an attack on the queen side. The exchanges started on move 73, Leela captured the black c and d pawns and the engines reduced to a RB vs RB position. 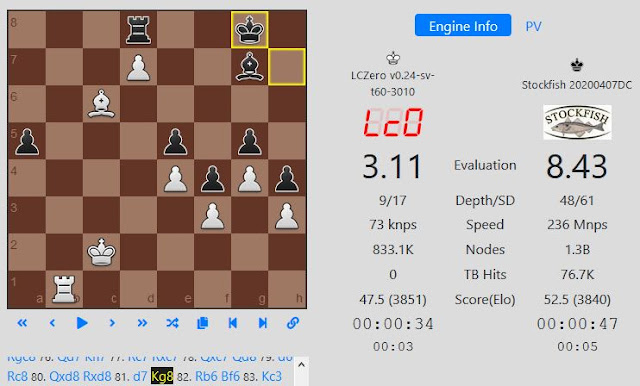 Stockfish could only block the white passer, its bishop covered the promotion square but it couldn’t see the pawn while it was on d7. The engines traded bishops, Leela gave the passer but started to gobble up the king side pawns. The game ended in a winning rook ending with Leela 3 pawns up. Leela wins another game pair, lead extends to +6.

Games 99-100 started with the engines castling in opposite directions. Stockfish pushed pawns on the king side facing the black king in game 99. Leela placed its major pieces on the queen side facing the white king, then opened a file in the center. Evals increased over 1, Stockfish thought its king was safe enough and opened a file on the king side. 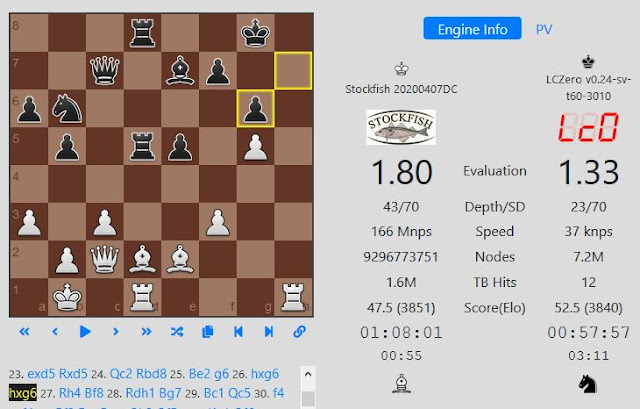 Stockfish doubled rooks on the h file and threatened mate. Its eval jumped over 3 when it gave 2 pawns and its queen joined the rooks on the h file. Leela barely held its position and it gave a rook for a bishop and exchanged pieces. On move 42 the game reached a QR vs QB position with Leela a pawn up. 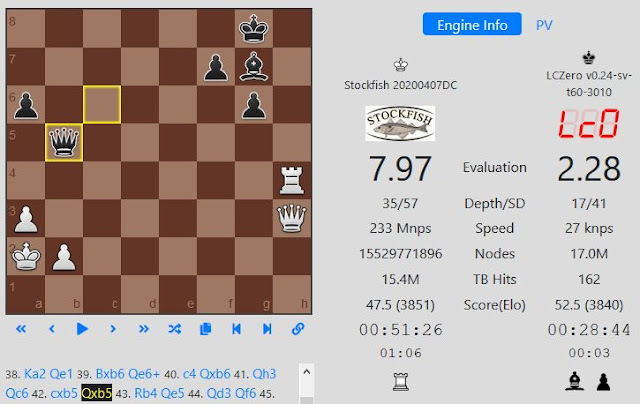 In game 100 Leela pushed pawns on the king side, and managed to place a pawn on h6. Stockfish kept the king side files closed and prevented an attack along the long open diagonal, at the price of giving a rook for a bishop. After exchanging queens the game reached a RRB vs RBN position on move 32. Leela created a passer on the queen side, evals went over 1 and the engines shuffled. On move 55 the engines exchanged bishops, Stockfish’s eval jumped over 2 for one move and then dropped to 0 when Leela moved. The engines exchanged a pair of rooks and Leela’s eval also came down. Stockfish created an advanced passer that was strong enough to compensate for the material. The game ended in a tablebase draw on move 82. Stockfish wins the last game pair, Leela’s final lead is +5.